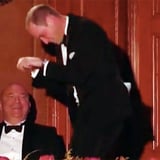 Prince William loves riding horses, but as it turns out, his skills are also useful off the field. During Tuesday night’s broadcast of this year’s Royal Variety Performance in the UK, a new video aired featuring the royal hilariously showing a group of kids how to gallop like a horse after kindly being asked. Still, the best part, perhaps, is Kate Middleton’s reaction as her husband covers his eyes in embarrassment.

The Royal Variety Performance dates back to 1912 and helps support artists in the entertainment industry. This year’s show was held on Nov. 24 at London’s Palladium Theatre and brought out several stars including Louis Tomlinson and The Killers.